Why The High Achievers Have Moved to Shop Class

A new breed of students has flooded into career-technical education, and they’re transforming a slice of the K-12 world that’s long suffered from stigma and disrespect.

These students are focusing on professions like engineering and health care instead of traditional trades like manufacturing and agriculture. They have higher grades and test scores, and more positive attitudes toward school. They come from better-educated families and are more likely to attend four-year colleges than their peers in old-school career-tech education or what was once known as “vocational education.”

Take Tony Peeler, for instance. The 18-year-old attends a career-tech-ed program at Yvonne A. Ewell Townview Center in Dallas. Under one roof, the program blends old and new: Students can dive into fields like automotive or dental assisting, or study fields like law or engineering that aren’t traditionally associated with vocational education.

Peeler comes from a professional family: Both his parents have bachelor’s degrees in accounting. He’s got his own plan mapped out: He’s immersing himself in law and criminal justice studies now, and he’ll shift to biomedical engineering next fall, when he starts George Washington University in Washington D.C. Then it’s on to law school, so he can become a patent attorney.

With aspirations like his, Peeler says he fends off a good deal of confusion when he tells people he’s in a career-tech-ed program.

“Some people know it’s more than the traditional stuff like automotive and carpentry. But some of them, they say, isn’t that a way to have a career right out of high school? They don’t know,” he said. 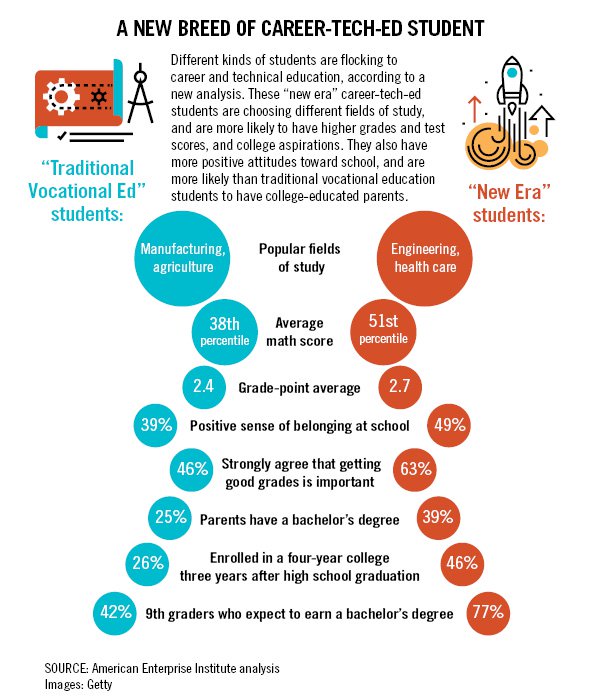 The expansion of the career-tech-ed tent, which appears to have taken shape in the last 10 to 15 years, marks a sea change in the world of students who choose career-oriented studies. And it carries the potential to ease the stigma that’s long dogged career-technical education.

Since the 1920s, when federal law first provided funding to states for programs in agriculture and the trades, students in vocational education have typically downplayed hefty academics—and college—in favor of hands-on job preparation.

But a new report makes the first data-based case that this could be changing as schools reshape their career-tech-ed programs and build their academic muscle. As a new breed of more academically inclined students flows into career-tech education, they could drive deep changes in those programs, and help erase the low-wage, blue-collar stigma that’s trailed them.

There’s risk in the new dynamics, too. The report notes that career-tech ed is “bifurcating” into distinctly different groups of students. That shift risks concealing, rather than solving, one of career-tech education’s key challenges: ensuring that students in traditional fields of study, like construction, are getting as good an education as their peers in white-collar CTE fields like computer science.

“If one of the real purposes of vocational education is to serve students who aren’t very academically inclined, and less likely to go to college, then an increasing share” of the new kind of career-tech-ed student “could take the focus off the kids who need it the most,” said Nat Malkus, a resident scholar at the American Enterprise Institute, and the author of the new report.

James Rosenbaum, who has long studied career-technical education as a professor of sociology and education at Northwestern University, said the changes outlined in the AEI study remind him of the dynamics he’s seen in racially integrated high schools.

“You have this integrated school, but the lunch tables are almost always segregated,” he said. “With CTE, you’ve got all these kids falling under the career-tech-ed category, but they’re falling into two very separate kinds of occupational fields. The question is how to serve both of those groups well.”

Malkus analyzed student transcripts and several sets of federal data to document changes in the career-tech-ed student population and the courses they take, between 1982 and 2013.

He examined students who “concentrate,” meaning they take three courses in one career field. He created two categories to describe the distinct student types that emerged: “traditional vocational” and “new era.”

The two groups’ family backgrounds and academic orientations show stark differences. Traditional vocational students’ math scores that hovered around the 38th percentile in 2013, while new-era students were averaging in the 51st percentile. Getting good grades was far more important to new-era students: 63 percent “strongly agreed” that this is important, compared to 46 percent of traditional CTE students.

As the profile of the new career-tech-ed student has changed, so have the courses they’ve chosen. A 75 percent drop in the volume of old-style business courses since 1982 reflects shifts in technology; few students take typing and office-procedure classes anymore.

But other course-taking shifts reflect changes in the job market and students’ priorities. Courses in the other popular CTE fields—manufacturing, human services, transportation, construction, and agriculture—fell in popularity by one-third between 1982 and 2013. The most-chosen new-era courses—public service, engineering, computer science, communications, health care, and hospitality—more than doubled.

A convergence of forces has produced these changes. The labor market’s demand for new skills has trickled into career-tech-ed programs.

The CTE field itself, too, has been working for years to shed its image as a route to low-paying jobs that require nothing more than a high school diploma. For decades, teachers and counselors funneled students they perceived as “not college material”—disproportionately low-income and minority students—into voc-ed tracks.

But the rebranding of career-tech education appears to have worked, the AEI study says: New kinds of students are opting for career-tech-ed concentrations.

Rosenbaum noted that the Carl D. Perkins Vocational and Technical Education Act, the main federal law for career-tech education, drove that rebranding. In the past 15 years or so, Congress has rewritten Perkins to attract more academically inclined students, and better serve the labor market, he said. By outlining new career-tech-ed fields such as information technology, Perkins offered a roadmap that shaped schools’ programs, Rosenbaum said.

Because the new-era career-tech-ed students will “disproportionately define CTE’s average characteristics,” the AEI report says, policymakers could be tempted to conclude that career-tech-ed programs are improving. But that would “mask” an important truth, Malkus writes.

The “improvements” are likely the result of adding more “academically oriented and otherwise college-going students to the CTE tent,” rather than of broad improvements in the programs themselves, the study says.

Perkins now demands that schools conduct a much finer-grained analysis of how their CTE programs and students are doing, said Kate Kreamer, the deputy executive director of the group AdvanceCTE, which advocates for high-quality career-tech-ed programs. That data, which states must begin reporting in 2021, will help make the case for which programs are serving students well, and which ones aren’t, she said.

The “big and important” questions raised by the AEI report can spark valuable conversations as states and districts examine their programs, Kreamer said.

But she also cautioned against using Malkus’ two student groups—one with higher academic achievements and aspirations than the other—to oversimplify career-tech ed.

Why Computer Science Should Be A High School Graduation Requirement

750 Million Reasons Why You Should Care About Bootcamps

We’re here to help. Let us know what items you’re interested in and a member of our team will contact you.

Would you like to see more of Wisewire's educational resources in your school?

Help your administrator register your school to get started (it's easy and free). Earn a $50 coupon while you’re at it (available to use in the Wisewire Marketplace).

Yes, Show me How Not Now